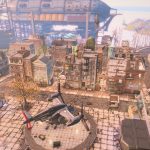 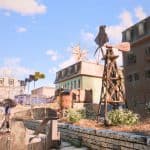 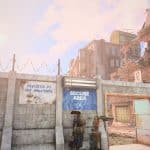 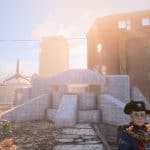 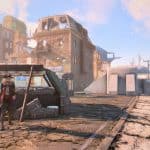 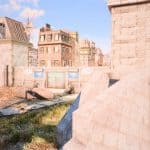 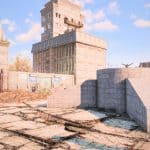 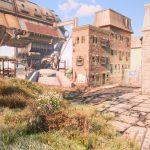 A large build that fortifies the Barrenwood Town Center and turns it into a military base.

Forward Operating Base Calypso, built in the ruins of the town of Barrenwood, is a heavily fortified series of ruins. It is the largest of the forward operating bases, with five entrances, various bunkers and encampments, a helipad, a diner, an armory and quartermaster, a general store, and medbay. The base is heavily fortified due to the very large packs of ferals that roam the island, in addition to a group of Children of Atom Extremists, which after the Nuka World trials, are now classified as a terrorist cult.

Due to the large amount of resources required to construct this walled town, many synths were teleported in, several of which were destroyed by ferals. This angered the Second Institute, but the General promised any deposits of metal located on the Island of Barrenwood were solely for the use of the Institute. This pleased them.

Located near the docking bay for the Columbia, the second of the Minutemen’s Air Ships, is the prison for the recently captured Atomites. They are currently being evaluated to see if they can be reconditioned into entering society, or should be executed. The Labor’s Assembly advocates for putting them through cult rehabilitation while the Trader’s Assembly thinks that it would be a waste of Copper Standards and should be executed by Synth Squad. The General is personally for execution.

Credits
Lain Aeternus
This content was uploaded by website visitors. If you notice any mistake, please let us know.
What is this mod use for