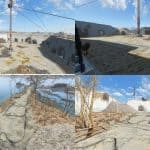 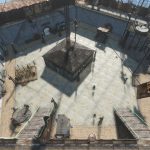 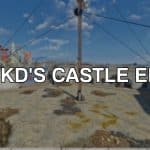 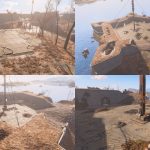 This mod edits the castle, the Minutemen HQ. In short my mod makes the castle look a bit cleaner. Precombined meshes/previs data/navmesh data have been updated in the affected cells.

WHY
I think in a post apocalyptic world there aren’t any people around who clean up lost places. But when people start to live somewhere and set up shop, they would clean their home from stinking trash and stinking fish. Well, at least most people would.

And since we’re talking about a militia/army when it comes to the Minutemen HQ, having clean spaces would be one of the first goals that the stationed troops would have. This is also my personal tweak with my own vision of the castle after the Minutemen settled down.

HOW
I removed things like rubble, trash, vines and mirelurk clutter that isn’t cleaned up with the cleanup event in the Creation kit by setting these objects to ‘Initially disabled’ and moving them 30000 units below the ground. I also removed the broken railings and random guard markers with the same approach. Afterwards I updated the precombined meshes, previs data and navmesh data in these affected cells.

CLEANUP EVENT?
After you kill all the mirelurks and mirelurk queen for the minutemen, you’ll get a call from Ronnie Shaw at Radio Freedom. I think the cleanup by the game happens when the quest ‘Old guns’ starts. This is when most of the mirelurk clutter is removed. Most.

IS IT SAFE TO DOWNLOAD/USE?
I added this mod mid-game and when starting a new game, I didn’t have any crashes related to this tweak. After countless hours with this tweak installed I also didn’t have any crashes related to this tweak. The performance in the affected cells should be the same with the new precombined meshes and previs data. When you’re inside the castle the previs system will stop rendering objects outside that aren’t visible to you. The NPCs’ pathfinding might act up sometimes, like settlers just standing around, but I think that comes from the base game.

ANY CHANGES IN THE FUTURE?
There are some minor visual problems at the moment (A few items floating mid-air in the armory room, a little bit of terrain clipping through one of the rooms and a sidewalk piece clipping through the wall just enough to be seen), and some things I’m not completely satisfied with, so I’ll change a few things in the future and improve this mod.

AND if I find out how to upload and manage a mod on Bethesda.net I might be able to publish this for XBOX and PS4 as well (I think Precombined meshes and previs data don’t count as external assets, since they are generated in a PS4 folder as well.)

Credits
mdkd99
This content was uploaded by website visitors. If you notice any mistake, please let us know.
What is this mod use for