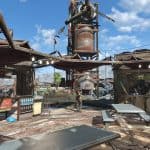 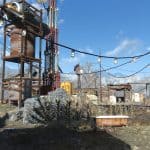 This settlement is located between General Atomics Galleria, Mass Fusion Containment Shed and Recon Bunker Theta. It’s kind of fun to build a city on a hill, but the build area is large enough to allow building pretty much anywhere around the hill.

I always felt that this area of the world had too few settlements, or the settlements were too close together. This settlement is squarely between Outpost Zimonja and Greentop Nursery. I originally thought about making the Galleria a settlement, but quickly realized that there are a number of mods that already do it and that the location is a little busy for a settlement.

Special thanks to neeher and 1000101 for their excellent tutorials on creating settlement mods.