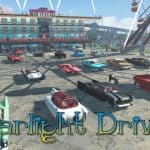 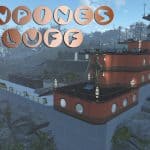 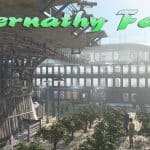 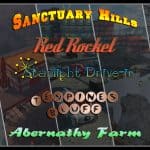 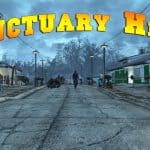 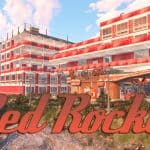 Settlement Starter Pack- five in one. A while back I was asked if I had bundled some of my settlement blueprints. This is the first five settlements I would build when starting a new game.

Then I received notification that CASS had been updated again. The last update meant that I had to reconfigure some of my designs, so I decided that this time I would start a new game and adjust the settlements as I came across them.

This is the first pack and my new game process usually goes as follows;

I placed Sanctuary after exiting the vault. On Codsworth’s advice; I traveled to Concord, placing
Red Rocket on my return.
On my way to Tenpines Bluff to learn of their issue, I recovered Mary Abernathy’s item.

Next stop was Starlight Drive–In, placing my third settlement before continuing to the Corvega factory.

After completing the Tenpines quest I placed the fourth settlement on that plot.

Finally, I went to Abernathy farm to return the item and place my fifth settlement.

1. Sanctuary; Should load into slot 23

3. Starlight Drive-In; Should load into slot 15

4. Tenpines Bluff; Should load into slot 11

5. Abernathy Farm; Should load into slot 20

I think I’ve caught most of the issues, Might be the odd“floater” I missed. Have added extra elements on some of the settlements where the foundations didn’t quite sit properly.

The individual settlement pages have more screenshots, if you need a better idea of the layout.

I build these settlements for my own amusement. I’m not big on clutter, I just want to get my settlement as full as possible and make sure there are enough amenities…..If I have to go and help the settlement fend off the three raiders that they can’t deal with, the defences pretty much ensure they are shredded by the time I get there.

There is plenty of space to personalise the settlement to one’s own taste.

I don’t and won’t do requests…I have placed these files here for anyone who might deem them useful.

Do you feel shortage of some options and features in Fallout 4? No worries, we have an exclusive offer for you – Fallout 4 Mods. With these mods everyone can develop the game and adjust to individual needs. Play smarter and get the best with Startup Settlement Pack 5in1 Fallout 4 Mod – your competitors will be powerless. Surprise them right now and increase your score right now. You are able to update your game within few clicks. Don’t miss this chance! If it sounds great, don’t wait a second anymore, this is a perfect chance to get the significant benefit against your competitors without spending much time or money.