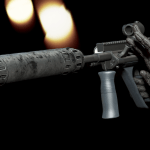 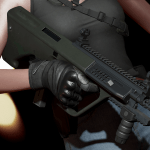 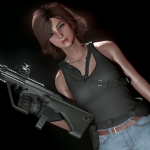 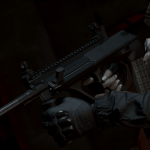 The Steyr AUG, a modular Austrian bullpup with variants ranging from SMG to LMG and everything in between.

“We are both professionals. This is personal.”

This mod adds the Steyr AUG, a modular Austrian bullpup with variants ranging from SMG to LMG and everything in between.

Features:
– 4 uniques:
– ‘Donut of Death’ located on a table at Slocum Joe’s.
– ‘Nakatomi’ located just inside Fallon’s department store on the left.
– ‘F88 Austeyr’ located at the Railroad HQ.
– ‘StG 77’ located at the FMS Northerd Star near the front.
– Reticle customisation, every reflex sight has 5 different ones each same as my other mods.
– Support for Scrivener’s Scope Overlay Framework with a custom scope overlay for the long range scopes.

Fallout 4 Version 1.10.162 or Higher
Due to recent changes in the latest updates to Fallout 4 and the Creation Kit that were done to expand the number of forms plugins can have means this mod and a majority of mods to release from now will not work in any version prior to 1.10.162, if you find your game crashing or
the mod just ‘not appearing’ after installation then it is likely you are not running this version of the game and you will have to update.

I also recommend using an ENB that replaces the vanilla bloom as it may over bloom the reticles in a way none of the ENBs used during testing do. I personally use Seasons of the Abyss and some colour tweaks in reshade.

– How can I get the weapon?
There are 4 ways of getting the weapon:
– Crafting at a Chem Lab (There are attachment presets for the Para, A1 and HBAR variants)
– Purchasing from gun vendors.
– Finding one of the uniques mentioned above.
– Console commands (“help AUG 4 WEAP” will give you the correct ID) or In-Game ESP Explorer

– Hasn’t this been done before?
Yes, both FX0x01 and ShinyHaxorous have done AUG mods but they are a few years old now and I wanted to add my own style to one of the few weapons manufactured in my home country (Australia).

– Patch for Horizon or other overhaul mods?
I won’t be doing any patches for other mods, anyone is welcome to make and release their own as long as it’s esp only.

– Xbox Version?
Anyone is welcome to port to xbox, just give credit.

– Why have vendor levelled lists for this one?
Because the AUG actually appeared in Fallout Tactics and is a bit older than my other recent mods. It’s only semi-canon/lore friendly so I didn’t want to go too far but if you want you can edit the injection quest yourself.